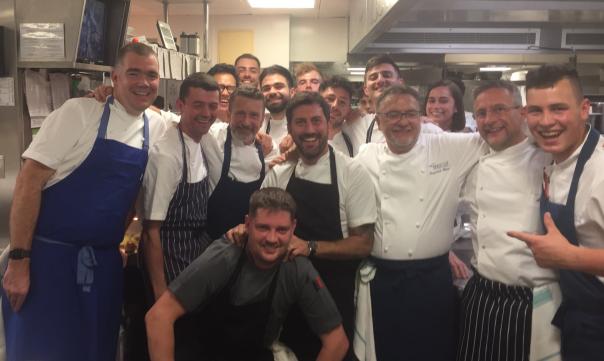 Michel Roux OBE and Alain Roux welcomed guests for a dinner in aid of the Royal Academy of Culinary Art’s Adopt a School Trust at The Waterside Inn.

The evening was an opportunity to cerebrate the impact of the Adopt a School Programme has on children’s lives.

Chef Thomas Marriage received Adopt a School sessions from Gary Jones when he attended Chalgrove Primary School and it inspired him to become a chef.  Eight years later he is now a commis chef apprentice at Belmond Le Manoir aux Quat’Saisons.

Marriage said: “If it wasn’t for Adopt a School, I wouldn’t be here. I thank the programme for where I am now. Adopt a School has changed my life, every child needs to be a part of this programme.”

The dinner featured dishes from some of the world’s most prestigious chefs:

Chef Simon Boyle, founder of social enterprise and restaurant Beyond Food & Brigade is one of 11 chefs who volunteer to deliver practical cooking sessions to children at the hospital school in central London.

He added: “What I take most from Adopt a School is the power that food has to transform children’s lives through health, raising aspirations, providing a new career path, and giving them an enjoyable activity which takes them away from their day-to-day lives.”

The evening raised a record number of funds for the Adopt a School Trust, partly raised through an auction of ‘exclusive prizes’, including two Executive Club tickets at Tottenham Hotspur, a Chocolate Masterclass for ten with William Curley MCA & Sara Jayne Stanes OBE and am overnight stay and dinner for four at The Waterside inn.

Stanes OBE, chief executive of the Royal Academy of Culinary Arts and Adopt a School, commented: “Food education is key to giving young people the knowledge, practical skills and ability to be responsible for their wellbeing and to adopt a healthier lifestyle through informed choice. This is why programmes like Adopt a School are so important.”